We recently got sent a scan of the Dutch Linux Magazine which covered Nextcloud last January in a rather awesome way. André Fondse contributed two-factor authentication support for Telegram and described in the article how that came to be and how it went. It made for a great story about how to get involved in open source and we commend Linux Magazine for covering it! To share some of the lessons he learned, we reproduce a summary here.

Nextcloud offers two-factor authentication (2fa), securing the login process above and beyond a simple password. André noticed that there was no 2fa functionality for Telegram, which features a bot API allowing it to be used for that purpose. After asking on the Nextcloud forums, he was encouraged by 2fa developer Christoph Würst to have a look at this, if he was interested. The note came with an offer for help with instructions, and so André got started. While he never had contributed to a big open source project, Christoph told him lack of experience is no problem and gave instructions on how to get started. 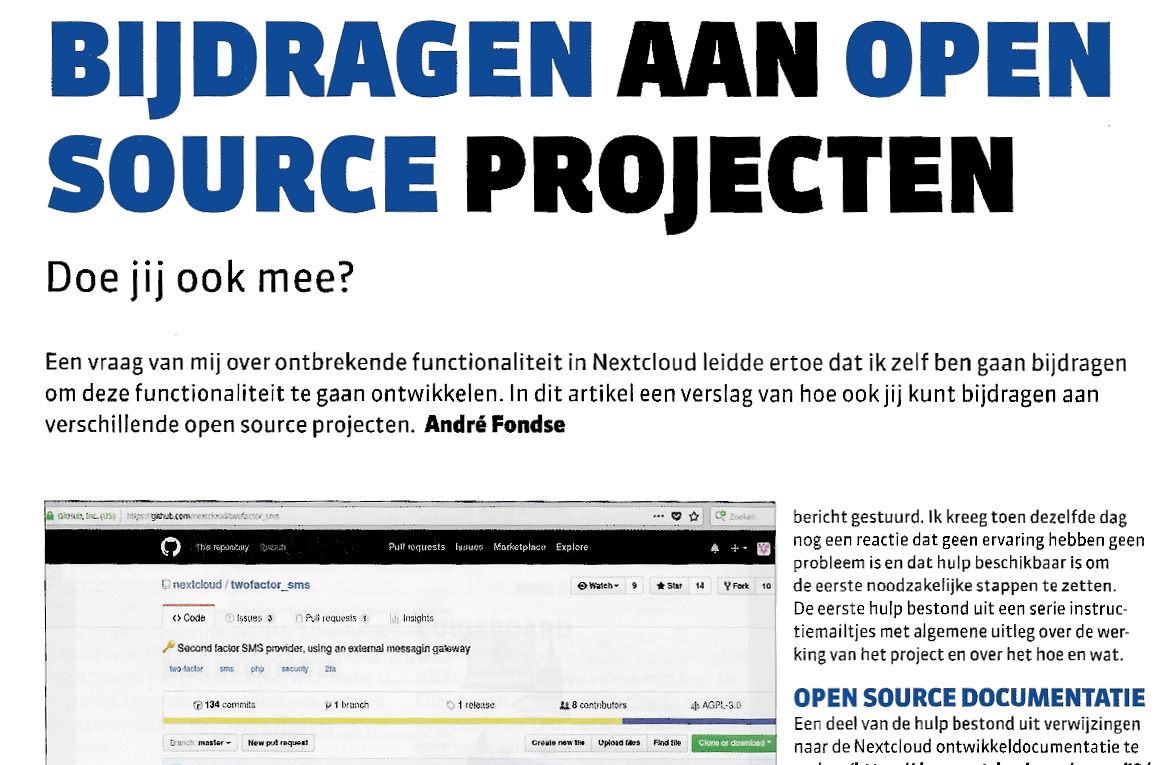 This began with links to the developer documentation to set up a development environment. André explains what comes next: dealing with Github. The first time, it can be quite a complicated beast, but good tutorials are available on guides.github.com. Once you’ve made changes to the application you want to work on, in this case the 2fa-via-sms app, a so-called pull request is done on Github. This essentially offers the code changes as a proposal to the developers maintaining the application. They review, give feedback and once approved, merge the code.

André describes how starting in an open source community is a big journey into the unknown. Many unexpected surprises can be found, both technical and social. André bumped into a variety of issues, and learned Object Oriented PHP development along the way – a skill certain to be useful in the future. He also noted he had ‘been lucky’ with Christoph: Whenever he got stuck, Christoph helped out. His patience and his style of answering questions, often pointing to resources rather than answering directly, encouraged further learning.

André ends on the note that the deadline for the Linux Magazine article came too early: He wasn’t yet finished. However, at this time, it has been finished and is published as part of the SMS 2fa app.

This makes for a great tale of woe and success about participating in open source. André is not the first and certainly won’t be the last, with literally hundreds of people contributing to Nextcloud for the first time each year! As an open source community, such contributions are our life blood and we consider it extremely important to be supportive of any such efforts. If you’re interested in joining development, see our contribution page for some hints on how to get started or do as André did – pick an area where you’d like to get involved and try! You don’t need to ask anyone for permission.