Today Nextcloud releases Nextcloud Talk for Android 1.1. This update brings a number of interface and feature improvements to the Android app, including Push-to-talk, F-Droid support and improved call actions.

Nextcloud Talk is a self-hosted, enterprise-ready audio/video and text chat solution giving users the highest degree of control over their data and communication. It was announced on January 11, 2018, and we are excited to see that our Android app is nearing 10K active users already!

The design of Talk’s contact view was reworked, among others with the possibility to group contacts.

Push-to-talk was added for this release, bringing half duplex mode to the Nextcloud Talk app. It is now possible to have calls where only one party can speak at the same time when using the app. This is very useful, for example, in calls with larger groups in enterprise environments.

Since this release, you can create group and public calls on the Nextcloud Talk app. 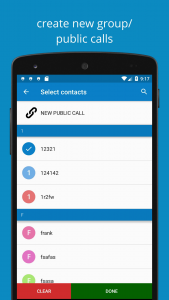 It is now possible to join public calls on your own or someone else’s server using the app. This also works for password-protected calls.

You can now set, change and clear passwords for calls as well as rename and share calls. With this release comes also the possibility to make calls private or public from the mobile interface.

Support for F-Droid has been added for this release, giving users of this Open Source Android app store access to our Nextcloud Talk app.

Of course this version of Talk also brings many bugfixes and additional improvements. Here’s a quick list:

If you have not checked out Nextcloud Talk, time to get started:

If you encounter any problems, you can report them here in our github repository. That is also where you can get involved in development! And in the play store, you can choose to join the Beta channel for the Android Talk app to help test.